Last week I was invited along for a craft beer excursion to Stoudt’s Brewery, courtesy of my friends at the Mohawk House. The trip started out at High Grade Beverage. They are a major distributor of Â wine, spirits, soda and beer – all the staples, to be sure, but their craft beer portfolio is really something else and worth mentioning. Some of the breweries they carry includeÂ  Jersey’s own Flying Fish, Victory, Unibroue, Nectar Ales, and Otter Creek. Check out their “craft” portfolio. 9:30am – We are greeted to an open bar consisting of morning libations and a nice continental breakfast. No complaints here… I had a bloody mary; should have went for the Irish coffee. Failure on my part. I mentioned this was an excursion, right? High Grade chartered a bus and it was definitely the highlight of my journey. I felt like I was on a grade school field trip! On the bus were complimentary beers from High Grade’s outstanding portfolio. After a few beers and a two hour bus ride, we finally made it to Stoudt’s Brewing in Adamstown, Pennslyvania. Stoudt’s has a lot history, so I will try to keep it brief. Ed Stoudt opened up his first business (Stoudt’s Kountry Kitchen) in 1962. Since then he’s made a lot of changes to the restaurant – originally modeled after his father’s chicken place, then transformed into a western style steak house, and eventually settling on an upper-class Victorian style. The name was only changed once and still remains the same: Stoudt’s Black Angus. During the restaurant’s opening in the 60’s, Ed developed a love for antiques and rented out his cellar space to local dealers. It started as a small venue in the basement of the restaurant and is now a 78,000 square foot building housing over 400 merchants. Stoudtsburg was awesome! Little shops and cafes spread around this tiny village as if to capture a little of the German spirit. Here you can find furniture, clothing, jewelry and artwork. Sweet fountain in the middle of it all. Let’s get on with the beer talk. In 1978 Ed and his wife opened the Bier Garten and had their firstÂ GemÃ¼tlichkeit Beer Festival. Everything was up to their standards at the event, except for the beer – it wasn’t fresh! They knew they had to have some quality brew at their festival and what had been served was insufficient. So, Carol and Ed began to take trips and meet with different brewers, eventually winding up at a Brewer’s Conference with known figures such as Charlie Pappazi and Ken Allen. It wasn’t long before they started Stoudt’s Brewing Company. Established in 1987, it was one of the first microbreweries to open since Prohibition and was formed during a time when most microbreweries failed to stay open for more than a few years. Another familar figure in the craft beer world – Karl Strauss – helped Ed, Carol, and their inaugural brewer Scott get their brewery going. Originally brewing only 500 barrels for in-house use, Ed and Carol picked up an antique bottle filler for champagne magnums in 1988 and have grown drastically to what is a 10,000 barrel brew house today. It was bottling day so we needed to be aware of our surroundings. Aside from anÂ informationalÂ tour we had a nice spread of food for lunch, and of course, endless samples ofÂ Stoudt’s beer. I opted for a piece of fried chicken and a hot dog with kraut and mustard. Which brew should I taste? Double IPA it is. You can’t have just one. I was a big fan of the American Pale Ale. One of their original beers, Pils, is a German-style pilsner. Crisp, hoppy, refreshing, and – might I add – fresh. Our friend Kasey from the Mohawk House won this sweet clock and bequeathed it upon us. It lights up the office pretty nicely. Thanks! Don’t forget to swing by the gift shop. They have t-shirts, glassware, hats, posters – even beer. You can get some exclusive brews here that aren’t in stores. Take this bottle as an example: 1860 IPA brewed specifically for McGillins Old Ale House in Philadelphia. I can honestly say this was one of the best trips I have been on in long time. Even though it was only a day, I feel like I got to take a mini-vacation to Germany and really enjoyed myself with some fine food and good beer. I would like to thank Steve and Rachel from Mohawk House, Kasey for tagging along with me, and Mike along with everyone else at High Grade for putting this trip together for the local bars and restaurants. I can’t wait to go on the next one! 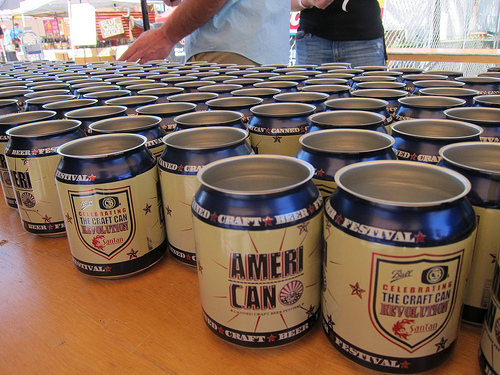